Survival of the Fittest

We are excited to announce that ARK: Survival of the Fittest is now available as a totally free, standalone, ‘Multiplayer Online Survival Arena‘ built for eSport gameplay!

SotF originated as a spin-off mod which came to be with the release of our ARK: Survival Evolved development kit. The mode was first available as a ‘Total Conversion‘ and debuted worldwide with a 70-person slaughter fest of a tournament. Following the success of the game mode, tournaments, and feedback from the community, SotF has been refactored into its own competitive game including four new modes, a robust ranking system, massively boosted performance, cosmetic-tiered rewards, lobbies/parties/on-demand-matchmaking, and constant iteration. That’s not all though! On top of releasing as a free to play game, SotF will also be awarding cash prizes for the top players in each ‘Survivor League‘, so ARK survivors can start playing their favourite game at a professional competitive level!

Survivors can form one to six person Tribes with the options to choose Unofficial (Player-Hosted) and Official (Ranked) servers, and a variety of game-lengths and sizes in which to play. Players will start in the base forest environment introduced in the original ARK: Survival Evolved, with new environments and creatures introduced as the game evolves. Dedicated eSport rankings, matchmaking, reward, and upcoming Tournaments make ARK: SotF readily accessible to all players and after each month we’ll be awarding over $50,000 to the Top-10 Ranked Players in each of the four game modes, referred to as the ‘Survivor League‘![survivetheark.com]

Balanced for intense competition, contestants begin in a neutral staging area where they can communicate pre-game, strategize, or talk trash. After a countdown, they dramatically descend from the sky onto the ARK in a circular formation via beams of light. There is a cache of valuable items in the center – do survivors dash for the goods and fight it out, do they run into the forest and hide, search for Dinosaurs to rapidly build their army, or do they freeze up from the sheer terror of death? A continually shrinking “Ring of Death” forces contestants ever closer together over time. The hunt is on! 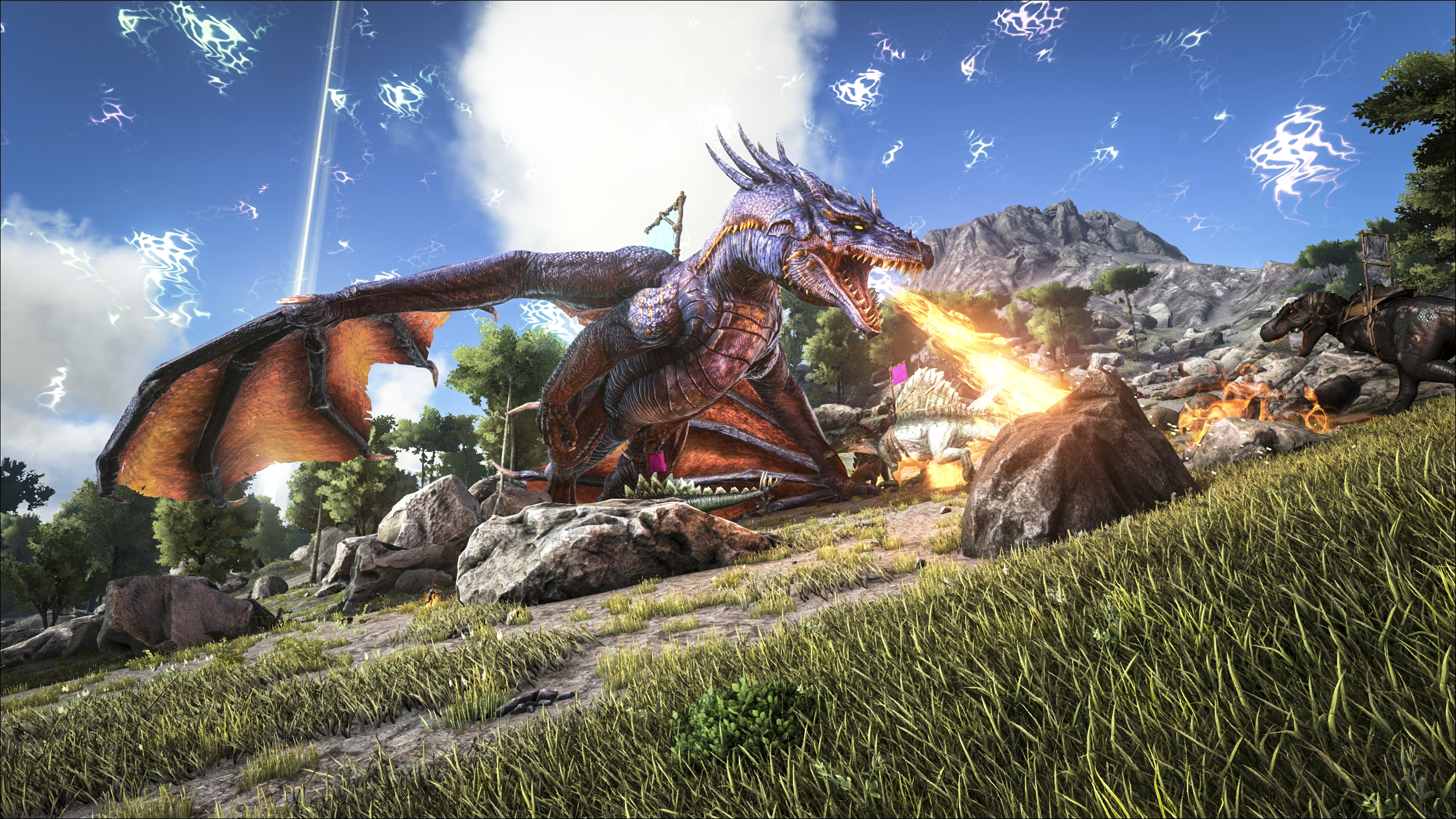 It would not be what it is today without the support of its very passionate fanbase, which has truly shaped the game. We’ve had great success with ARK: Survival Evolved being in early access has allowed us to streamline the way we design, develop, and test. We look forward to having SotF enter into Early Access, using our past experiences, working together we’ll be able to take this game to the next level!

We’re launching SotF into Early Access absolutely free with no monetization, however you will get the benefits of a fully-supported game. There will be constant communication and a team working on the project. Band together with your friends and compete for a chance to win exclusive, unique, and fun cosmetics – not to mention bragging rights! 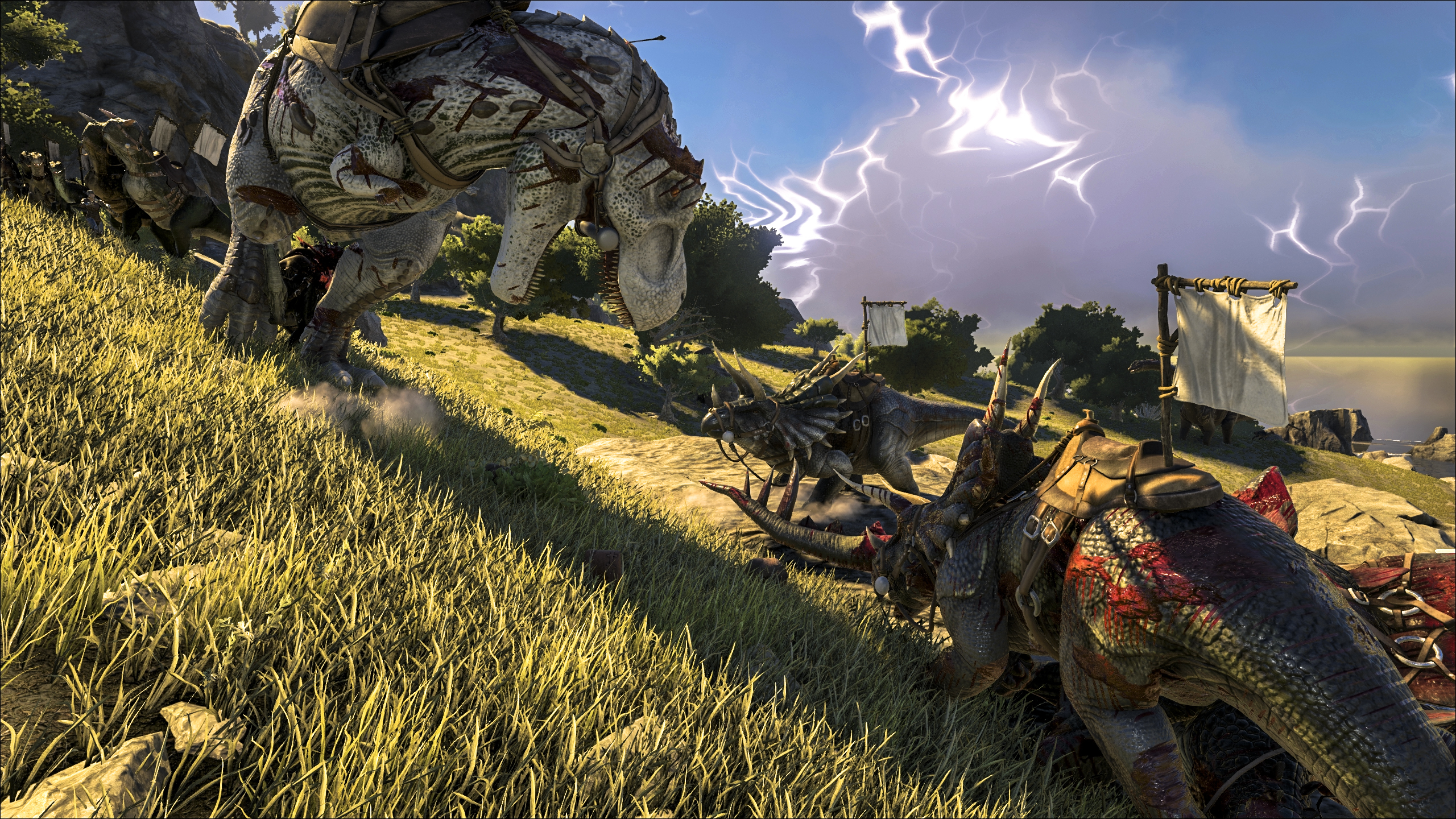 Prepare yourself for the ultimate dinosaur competitive experience. SotF has been developed with passion and love for the genre and the hopes to make this the #1 entry in the category. Come and be a part of history in the making. Tribe up and let’s see who the fittest survivor is!

Some more exciting news for our Asian players! Starting today we will now be allowing purchases for ARK using RMB (China) and NTD (Taiwan)! And with the arrival of these new currency purchasing options, we will be launching a block of new Asian servers hosted throughout Hong Kong, Singapore and Japan. You’ll find this listed on the Official Server filter through Asia 506 to 514, including 3 PvE servers! And there is more where that came from 😉

Last month we had launched a global-testing server to gather feedback and research into how effective hosting these special servers would be. We would like to let you know that this test server will be wiping within 3 months and closer to the time we’ll providing you with a more specific update! Thank you to those of you who have contributed feedback and played on those servers as the information has been very valuable!

If you haven’t had a chance to try out ARK yet, consider picking us up as we’ll be on Steam’s Midweek Madness sale for 40% off!

Thank you survivors for your ongoing support and we really hope you enjoy the game! Don’t worry survival fans as we’ll be bringing some epic content to you very shortly