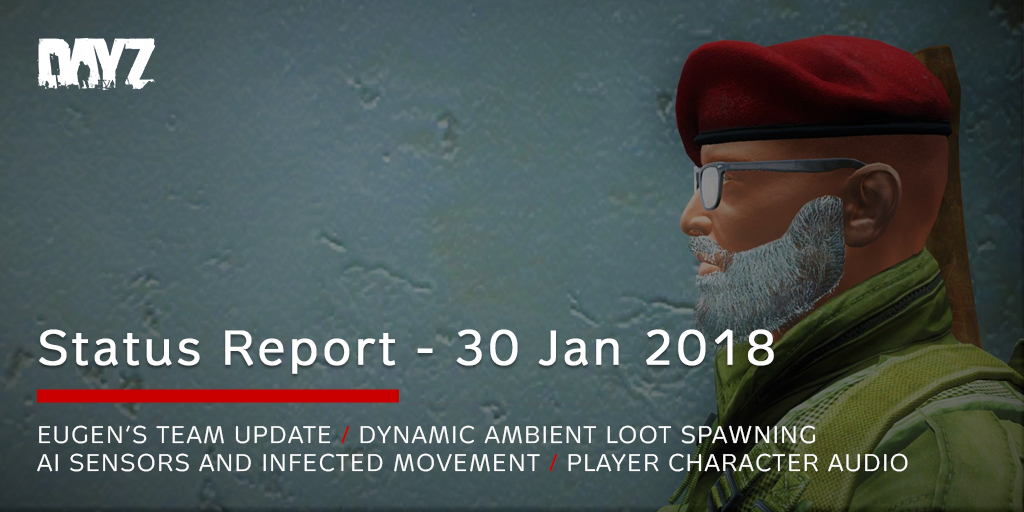 We’re keeping it short, but sweet this week – we’ve got some changes in the team, and so along with his regular dev update, Eugen is taking the time to thank some of his team members and to say goodbye. Since we’re at saying good byes, Peter is finally done with having apple tree and stone texture spamming in the game, and hints at our new dynamic ambient loot spawning. Finishing off the dev part, we have Mirek teasing bits about the infected movement, and our Audio Designer Filip sharing his latest and greatest. As always, Baty adds your awesome community content, and the ever famous Status Report riddle! let’s get to it, survivors.

Dev Update/EugenWhen something ends, something else begins. As I mentioned in the Year in Review video, it’s always hard losing team members, but it’s a necessary part of the development cycle. Lots of people have joined the team over the last four years, growing from a strong core into a large, two-studio production with almost 80 developers full time. Some are moving on to new challenges, and I wanted to thank them for their contribution to what DayZ should be. A monumental undertaking that all these people were part of.

My thanks go specifically (but not exclusively) to Andrej Sinkević (who is moving back home to take care of his family) for overseeing the creation of new weapons sounds, environment sounds, and making sure we are expanding upon the options available.

My thanks also go to our Environment Designer Senchi for making Chernarus exciting again, for his passion, for thinking outside the box and for trying new things.

At the same time, I would like to introduce Filip Čenžák, who will be taking over the DayZ responsibilities in our Audio Department, and will be sharing what’s coming here in Status Reports :). Good luck, Filip!

Even though we’ve said a couple of good-byes early this year, the work hasn’t stopped and we have progressed significantly. So let me go over the updates that we have seen on our internal build – there are some exciting things we have been working on:

We’ve had a prone review meeting last week in order to look over what’s next for the feature, and we have started tweaking the turn animations and bugs with collisions in different parts of the prone animation.

Right now, we’re working on a script implementation to make ladders available ingame, as most of the stuff is almost ready. We will definitively come back and check the data and overall ladder setup again once this part of the game becomes testable.

Another iteration of melee combat is now available in-game, with new heavy and light attack modes, new evades, bug fixes for targeting, and animations for melee with ranged weapons – those are ready to get into the animation graph for quick tests.

We are trying to unify the spawning in-game to use one spawn function, and we’re refactoring dynamic ambient spawning system for specific situations around the player. Peter shares more about this in his part.

Work has again started on vehicles, as the Enfusion Engine hierarchy for entities gets further in its development. Our focus is on the refactor with creation of locals pace, and real player character being in the vehicle rather than a dummy character. If you remember, there were issues like entering a vehicle and crashing, which would teleport you back to where you entered the vehicle, simply because the system didn’t really allow for something being inside of a vehicle – it was all dummy characters and lot of improvised hacks.

The camera has progressed further through several bug fixes, and we are starting to go through ingame data and collisions to fix objects with wrong collisions, which of course benefits more features than the camera itself.

We have finally started again the work on the infected, as the player character features are getting in better shape. Mirek has started a refactor on sensory mechanics, jumping, and combat, and we are going to have a longer discussion on our expectations tomorrow.

Besides the specifics above, the weapon team is getting through the expected list of weapons for experimental at a steady pace, implementing the new features for every weapon, adding all the animations and making sure everything works as intended. At the same time, we have people tackling issues of the last inventory implementation or looking into the server browser back-end.

And I’m going to shut up now and get back to work! 😉

Dev Update/PeterSearch for apples, now something of an iconic user action is gone forever. The same goes for every other search action present in the old DayZ!

As you know, search actions were added as a placeholder to broaden the possibilities of survivalism, and promoting the hermit playstyle in terms of gathering food and other useful nature resources – may it be rocks, sticks or feathers. Driven by a random number generator, which I’m really not a fan of, it was nearly impossible to balance the outcome of these actions. They were open to abuse by limitations of the old animation system, and they also didn’t make sense from a visual point of view.

Now, the part of Central Economy which deals with dynamic spawning is able to also spawn such ambient loot as apples, rocks or mushrooms. Dynamically spawned ambient resources are linked with static objects in the map, for example apples are linked with apple trees and rocks with stone paths or bigger rocks. 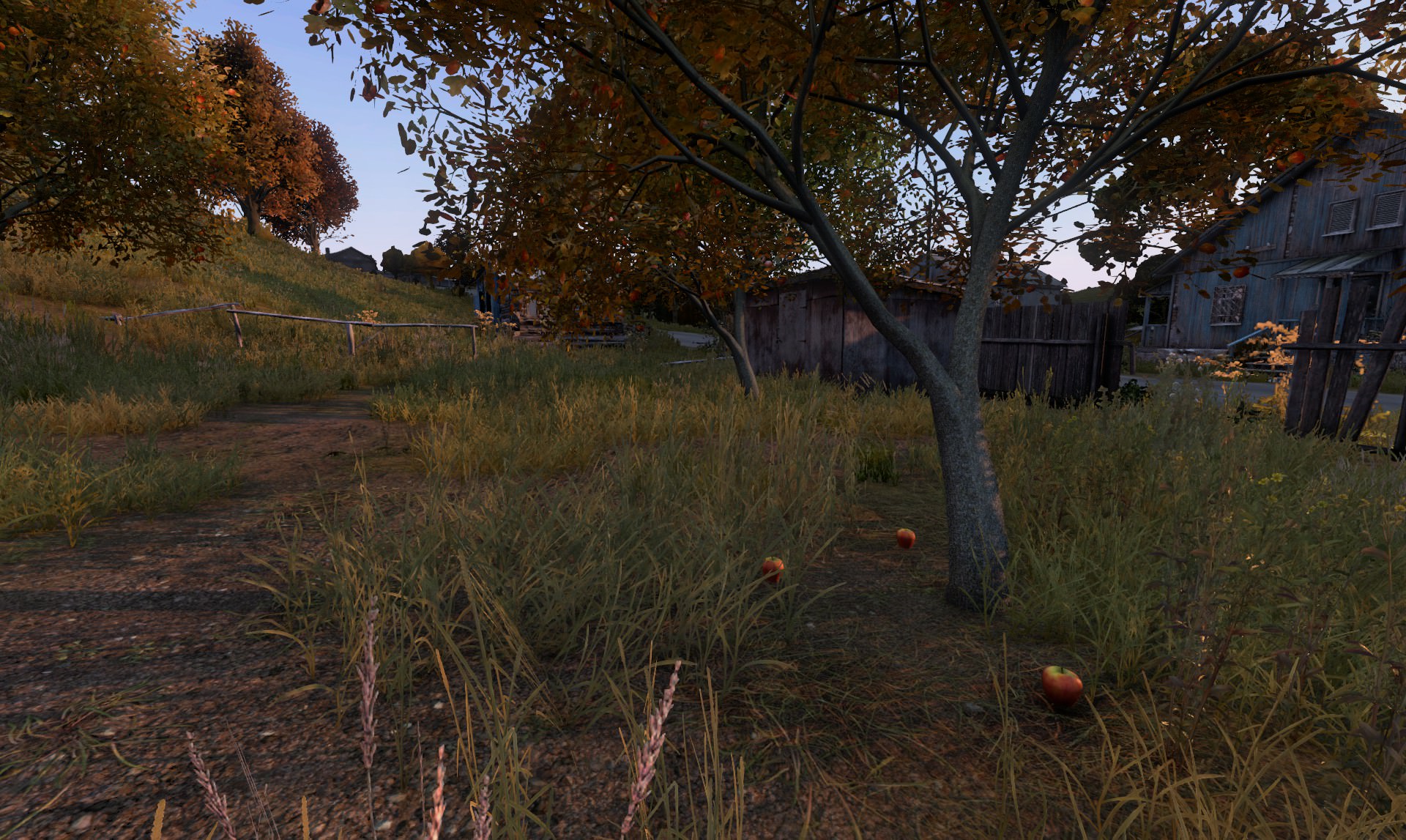 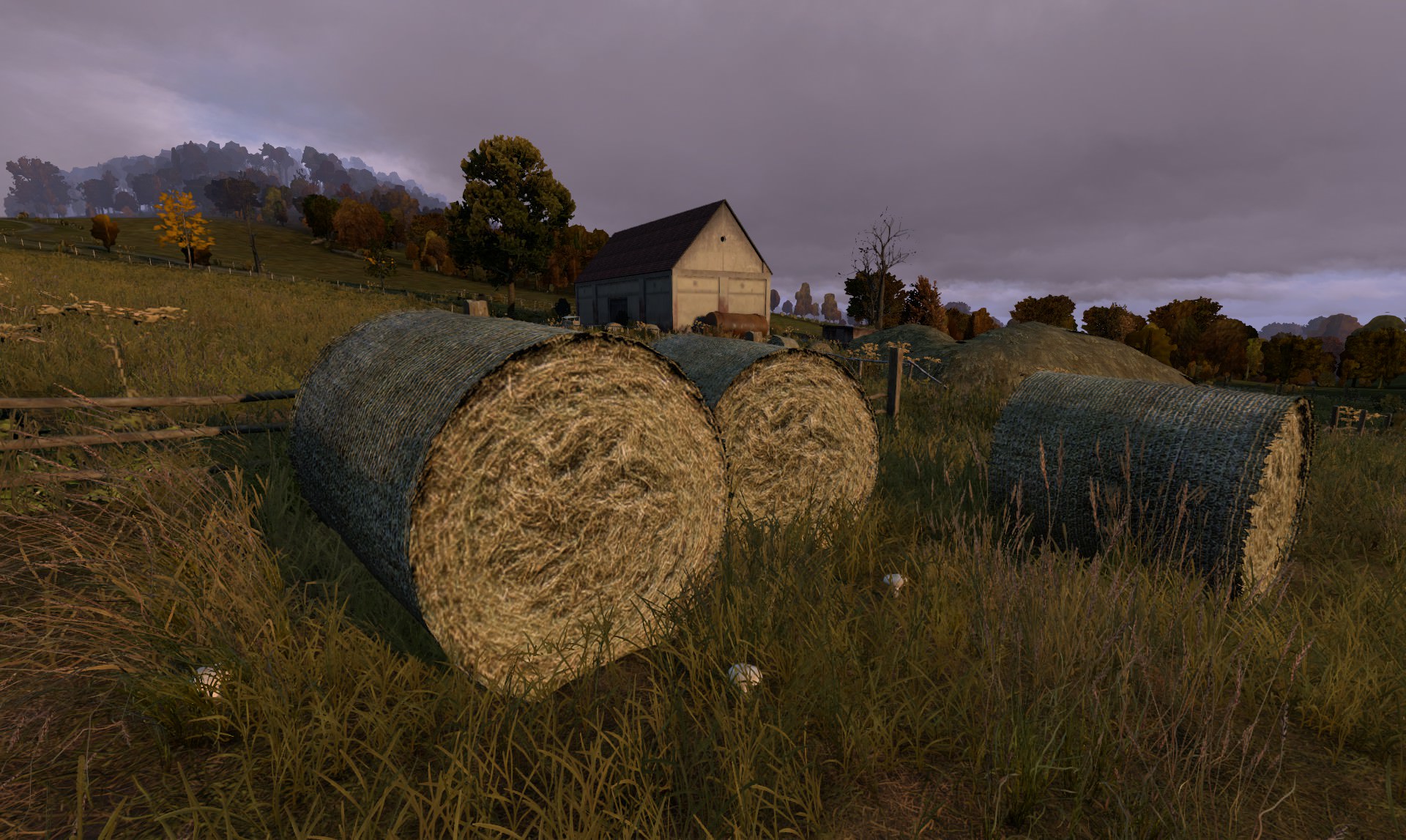 As mentioned these items are spawned dynamically around players, and they are capped from the side of a linked object, as well as by a total maximum amount available of that specific loot type (e.g. max 3 apples per tree, 100 apples total). Once a player leaves the area, ambient loot is despawned when its lifetime ends. Of course, as it’s part of Central Economy, it’s all properly synced, and all players will see the same ambient loot in any given area. Our solution is also friendly to server performance.

I’m really happy that we were able to finally add such feature as it puts emphasis on our physical approach to design, and provides a more authentic feel to the overall experience.

When you see it, you can take it… see you in Chernarus, folks!

Dev Update/MirekHello survivors, not much has changed since the last Status Report. We’re still dealing with pretty much the same tasks as last time, there’s just one little change. We’ve started the work on improving the infected a little bit earlier. Currently, we’re focused mostly on improving stealth mechanics, which means adding some new features for AI sensors and tweaking their parameters. Together with AI sensors, we’re adding some new animations for movement. Here’s a small teaser of three new movement variations. You can see that the movement is still not ideal, especially when the infected is making sharp turns, but rest assured, we will improve this – the animations are already prepared, we just need to spend time on the implementation.

Dev Update/FilipHi all, Filip here! As Eugen already mentioned, I’ll be taking over most of the audio-related tasks from Andrej – and that includes writing the Status Reports for you!

The sound department is focused on character sounds now. We could finally implement footstep sounds with the animation system as we intended. That meant creating a new animation event for every footstep in all animations. It took a while, but now we can synchronize footstep sounds with animations with much better accuracy. There are still some technical issues that have to be solved, so we hope that the programmers will find some time for us in their busy schedule.

The second major feature we are working on now is attachment sounds. That means cloth rustle, backpack or weapon sounds when the character is moving. We have a working prototype, which will allow us to have different foley sounds for different types of clothes or other things you can wear. For example, it will allow us to have different cloth rustle sounds for shirt and leather jacket. In the final mix, the sonic differences will be small, but still noticeable and should create bigger immersion for players.

You are important to us and we are glad to see all your content. We don’t want to keep it just for ourselves, so let’s share it! 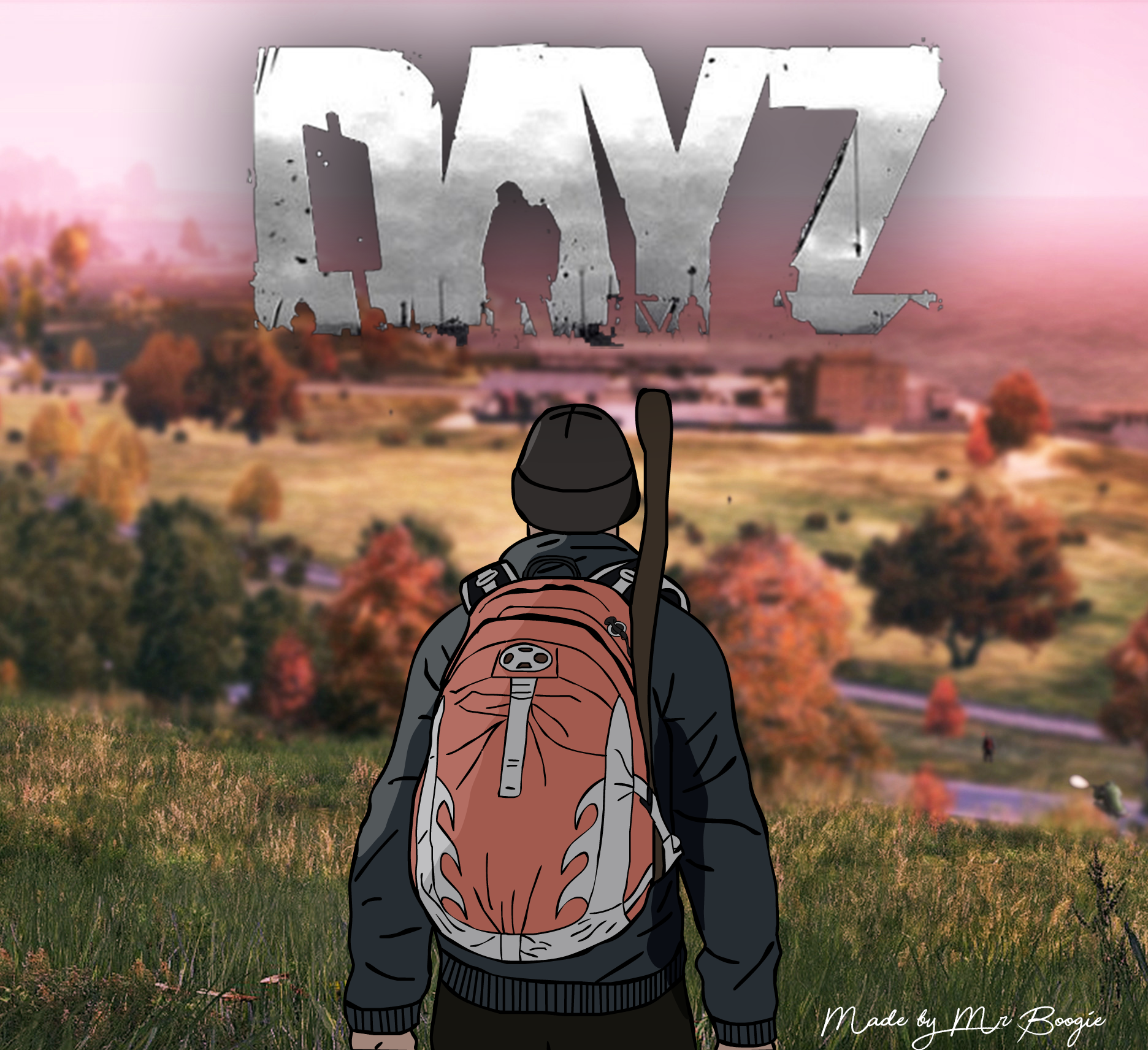 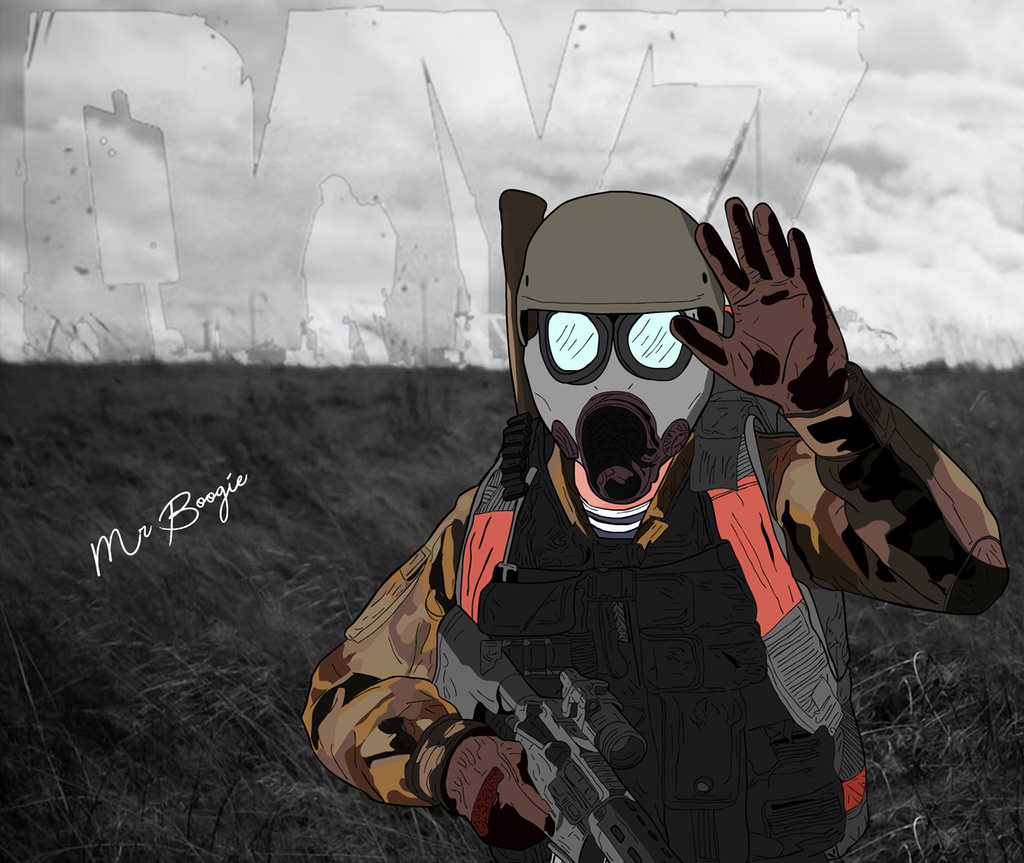 Eiemoja is a loyal DayZ fan with more than 2900 hours in the game and is also an enthusiastic artworker. If you are interested in his work, here is his Steam collection. 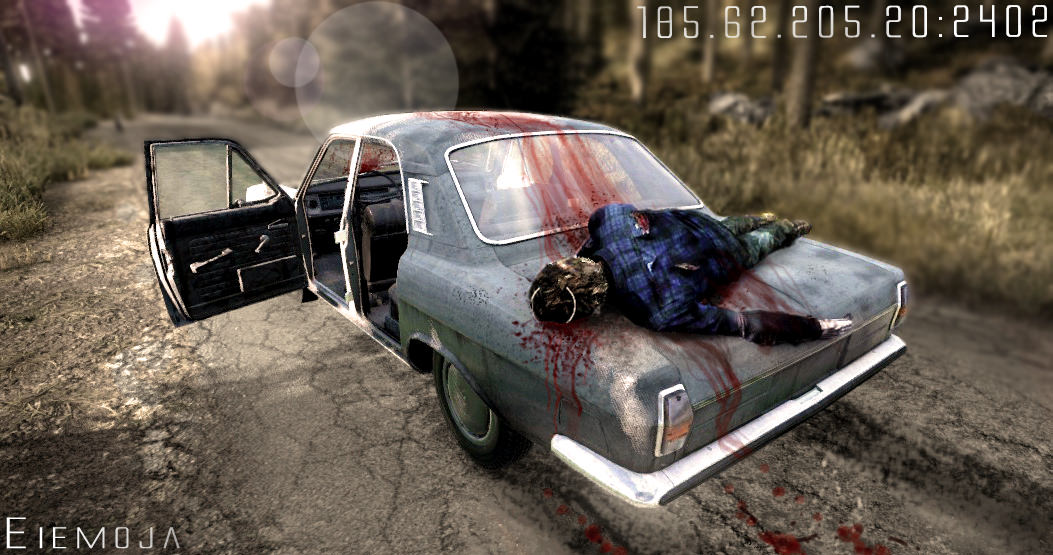 This picture by M.J.D. shows the last moments in the life of the owner of a village pub from Chernarus. I like hidden stories like this one. 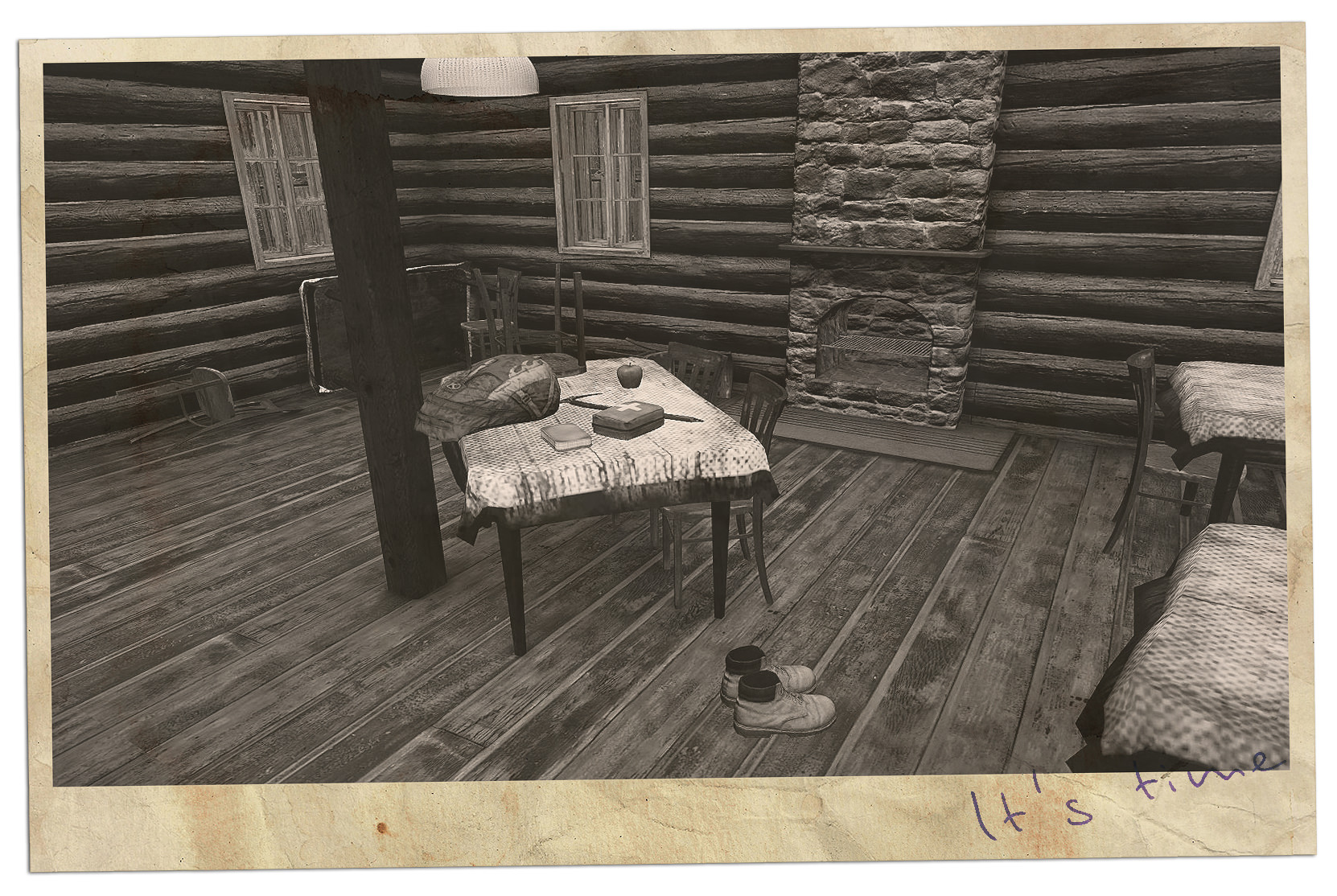 And when we are talking about stories, I fell in love with this one. It is romantic and sad at the same time. Good work!

„Close to retirement, an older couple, Archeologist and Chemist, traveled to Chernarus to look for out-of-place artifacts when they are hit with the outbreak. They stop at nothing to remain together through it all.“

I know we had M1NDR here last time, but this is one really entertaining video! He met Jessica the medic. But he didn’t know how much she loves blood…

We can see a lot of Snapchat filters on DayZ characters lately. There is a Reddit thread dedicated to it and people are adding their creations. 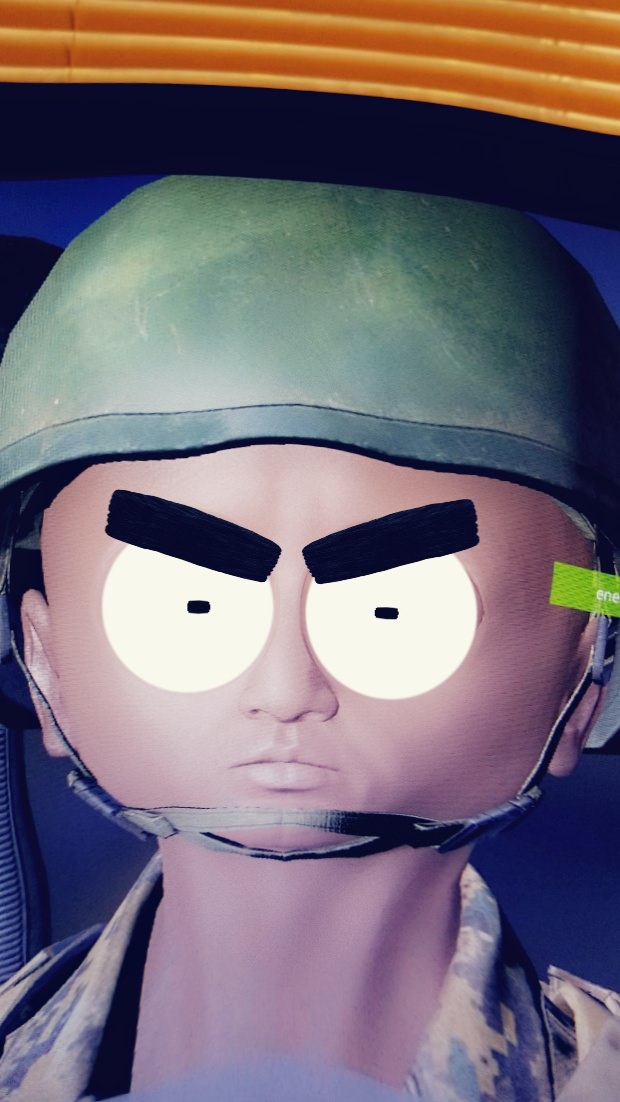 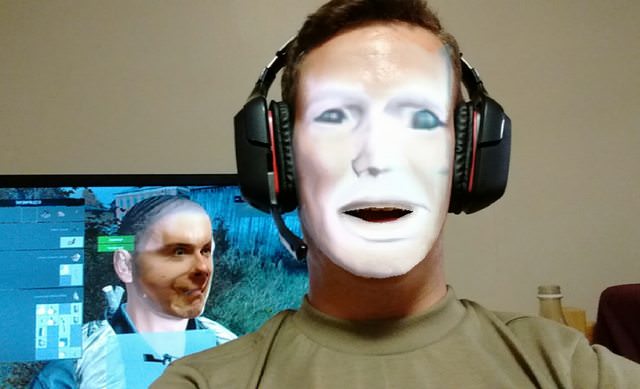 The answer to the last question was „Kumyrna[dayz.gamepedia.com]“. It is an old, abandoned town on a mountain plateau directly south of Guglovo.

The wall of fame:

Question of this Status Report: 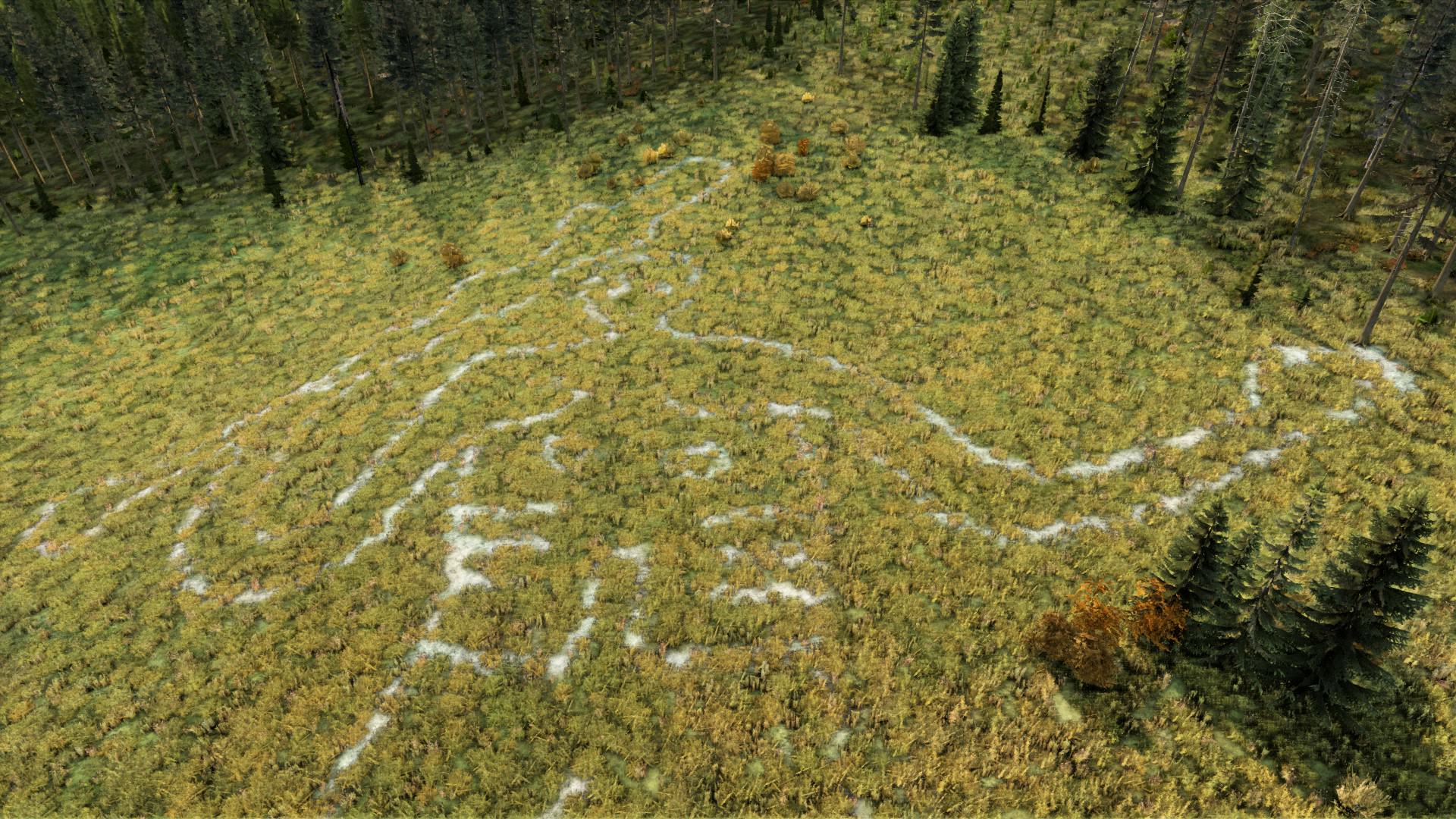 Thank you for your amazing work everyone and see you in two weeks!